Action for Older Persons / Our Staff 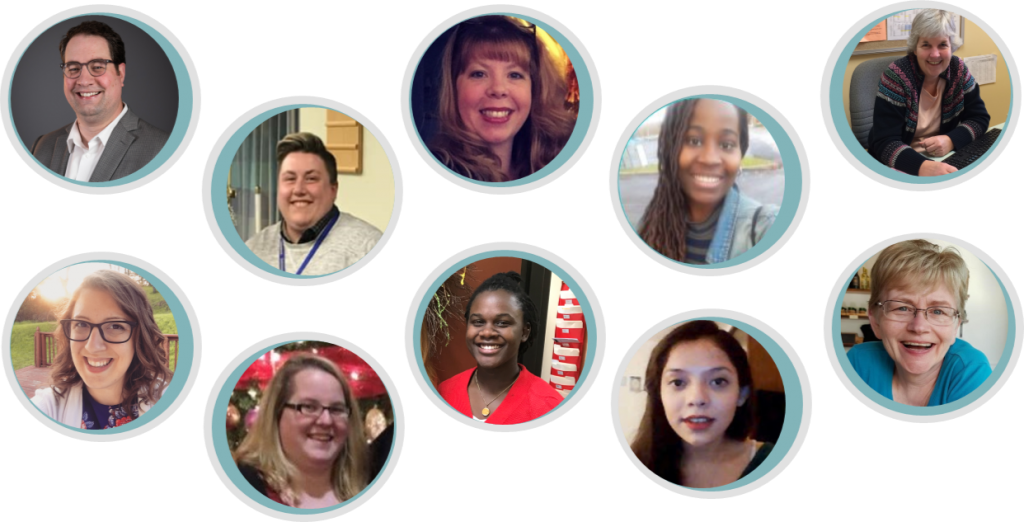 Robbie grew up in Johnson City, NY and he attended both SUNY Broome and Binghamton University, where he graduated with a B.A. in Cinema and a B.S. in Human Development. His first career began at Action for Older Persons in 2004 as an intern through Binghamton University. He then became an employee for a seven-year tenure as first the Communications Specialist and then the Director of Media and Community Relations. In the nine years since his departure as an employee, he remained connected to AOP by offering technical assistance as a volunteer and serving on the board of directors. He rejoined the organization in August 2020 as the new Executive Director.  When Robbie isn’t at work he enjoys spending time with his wife and four-legged friends watching movies and learning new photography techniques.

Rebecca (Becky) Bradley has been with Action for Older Persons since October 2011 as the Long-Term Care Ombudsman Coordinator and has led the program through its expansion with the program now serving Broome, Chenango, Delaware and Tioga Counties. Becky has spent her entire career focusing on the needs of our aging population and became AOP’s E-MDT Coordinator in January 2019. While working to diligently serve victims of elder abuse, Becky still finds time to stay involved in local community events and organizations. In her spare time, she can be found drinking coffee (all of it), schooling everyone on Game of Thrones lore, chasing her two nephews around or cheering on her beloved Woman’s National Soccer Team.

Mary Ann joined AOP in June 2013 as a Program Specialist. She came to AOP with 10+ years experience in Customer Services and Mental Health services. She has her A.S. in Human Services. In June 2015, Mary Ann became the Program Coordinator for AOP’s newer program the Independent Consumer Advocacy Network (ICAN) assisting those with both Medicare and Medicaid receiving assistance in their homes. She currently oversees the program in 5 counties, including Broome, Chenango, Cortland, Otsego, and Delaware. She prides herself on organization, dedication and advocating on behalf of her ICAN clients. She also has two kids that keep her very busy with school and sports.

Jane started working at AOP as the HIICAP Coordinator in December 2015. She began her career as a programmer for IBM, working there for 12 years. Then, after staying home with her children for a few years, she worked for 10 years as the Director of Faith Formation at Church of the Holy Family in Endwell. She is excited to be leading the HIICAP program which provides such valuable assistance to local residents.

Chereese joined AOP in June 2015 as a Program Specialist. After assisting with various aspects of the AOP’s programs, she became our Assistant HIICAP Coordinator. She continues to spearhead the Advanced Planning for End of Life program which helps individuals receive beneficial information about Advance Directives. Raised in New York City, she moved to Binghamton to continue her education and graduated from Binghamton University in 2014 with a Master’s in Social Work. In her spare time, she enjoys cooking, dancing, yoga, and spending time with her beloved cat Honeydew.

Morgan began working at AOP as a Long-Term Care Ombudsman Program Coordinator in November 2015.  She began her professional career at a Long-Term Care facility in 2007 as a dietary aide and, shortly after, became a dietary supervisor. After attending SUNY Cortland and earning her Bachelors Degree in English Literature, she started working as an activities leader at another facility. When Morgan isn’t advocating and empowering residents of Long-Term Care Facilities she enjoys reading and is a big fan of British history and pop culture. Once she receives her Hogwarts acceptance letter, she knows she’ll be sorted into Ravenclaw. You can often find her spending time with her husband, parents, and siblings (She’s #6 of 8 kids!), nieces and nephews, and involving herself in a variety of crafty things.

Reva joined the AOP team as a program specialist working at the front desk in February 2019, she was promoted to the position of LTCOP Coordinator in July 2019. Reva has a Bachelor’s degree in Human Development with minors in Gerontology and Public Justice. She came to us with a background that started in helping seniors in their homes and working as an activities leader at a local nursing home. She then went on to serve individuals with disabilities as a counselor for a few years at a local agency. Reva joined the team to continue to serve this aging population that she truly loves.

Serina joined AOP in May 2019 as a Program Specialist. Around the time of her employment, Serina became part of the HIICAP team as an intern counseling during Medicare Open Enrollment. She is currently enrolled at the University of Binghamton to achieve her Masters in Social Work. In her free time, you can find her doing community service for residents of Broome County.

Nilda has been with AOP since August of 2019. She recently earned a master’s degree in Public Administration and Social Work. She has previously interned with Bridges to Wellness at the Southern Tier AIDS Program and delivered clinical counseling and treatment coordination services to students at Binghamton University’s Counseling Center. She has hopes and dreams of being a mental health therapist but as of now, she is very happy working in the nonprofit world. Nilda is also passionate about animal rights and environmental advocacy. In her free time, she enjoys reading, pilates, running, hiking, and traveling.

Suzy joined AOP in December of 2019 after working in Mental Health and Children’s Services. She enjoys working at the front desk where every day brings new people and new experiences. Suzy enjoys reading, walking, hiking and exploring new places with her family and friends.

Action for Older Persons’ Board of Directors

FreshySites Copyright All Rights Reserved © 2014
Back to Top